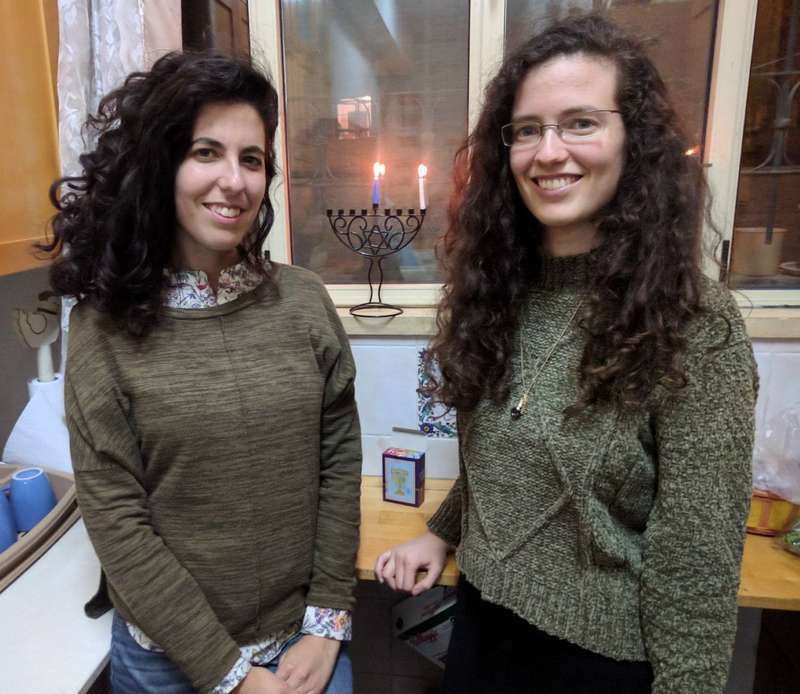 Sisters Anav and Reemon Silverman celebrate Chanukah in Jerusalem in 2017.

As a little girl, I can remember my family celebrating the Chanukah holiday in Calais, Maine, where ours was the only menorah lit on our snowy street. It was a special time of year filled with light and warmth.

Every night for the eight nights that Chanukah is celebrated, we would have guests over including our neighbors, classmates, and good friends, among them teachers, priests, doctors, dentists, and librarians. My sisters and I would sing the holiday blessings in the Hebrew language as we lit the candles in front of our guests, followed by dreidel games and holiday foods. Often times during the candle lightings, cars outside would slow down and sometimes beep their horns, in comradery.

My mom would decorate our home with Chanukah decorations that we had made at Calais Elementary School and Calais Middle School. Alongside the Christmas decorations that our classmates would create during December, our teachers always made sure to provide us with tasks for Chanukah decorations and activities. I can remember coloring a menorah (called Chanukiah in Hebrew) during first grade that my teacher, Ms. Mahar, gave me to work on, while the other kids had Christmas tree coloring pages. My mom was also invited to speak about Chanukah at schools, kindergartens and preschools in the area.

In addition, our band and chorus teacher, Mrs. Brennan, always included a Chanukah song among the Christmas carols and songs for the holiday concerts every year from our time at elementary school through high school. When the entire chorus sang “I Have a Little Dreidel,” and “Oh Channukah” it gave us a feeling of belonging.

When I look back at how we celebrated the Chanukah holiday some 20 years ago, it was a very special experience because of the community spirit that shone. Even though we were the only Jewish family in Calais at that time, we felt that this holiday brought everyone together and that locals appreciated our holiday just as much as we did.

Chanukah is celebrated for eight days and eight nights to commemorate the miracles that befell the Jewish people in the land of Israel some 2,000 years ago following the death of Alexander the Great in 323 BCE.

The Greco-Syrian Seleucid kings took over many of Alexander’s former territories including the area of Judea, which is today the modern state Israel. The Seleucids tried to force the Judeans to adopt Greek culture and beliefs, placing the Greek god Zeus inside the holy Jewish Temple in Jerusalem and outlawing the Jewish faith, brutally punishing those who did not abide the new laws. A small band of faithful but poorly armed Jewish fighters, led by Judah the Maccabee, rebelled against the Seleucids, and succeeded winning back Jerusalem and restoring the Temple and Menorah. One small jar of pure oil was discovered in the Temple, enough to light the Menorah for one day but the oil miraculously burned for eight days, giving the Jewish people enough time to produce more olive oil.

Every year we recall fondly the special times we had commemorating this holiday with the Calais community. My parents, who are visiting in Jerusalem for the holiday, still receive Chanukah greeting cards from good friends back in Calais while my sisters and I, are sent happy Chanukah messages on Facebook from Calais friends.

Wishing everyone a warm holiday season full of light and family!

Muppets for Diversity, Equity and Inclusion