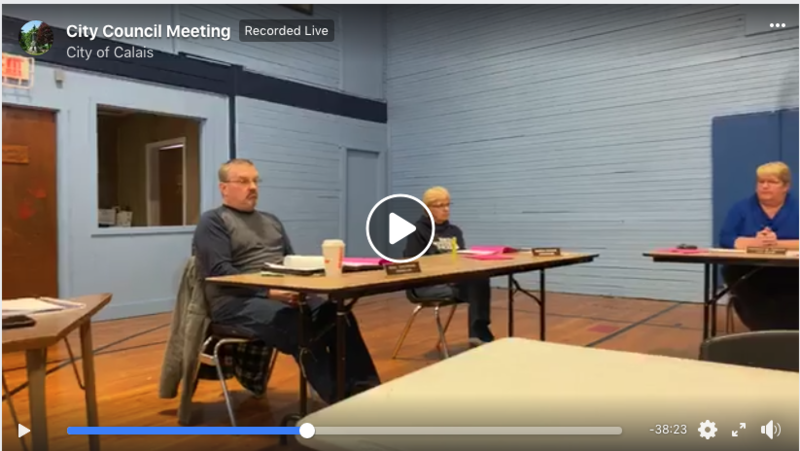 Will Not Enforce Governor’s Orders, Declares All Businesses Essential

The Calais City Council voted on Thursday to declare all businesses can open as they so choose, citing the City cannot tell a person how to make a living.  The decision comes despite statewide restrictions still in place by Gov. Janet Mills due to the coronavirus pandemic.

According to Councilor Mike Sherrard, the Wisconsin State Supreme Court just ruled that state stay-at-home orders and business closures are unconstitutional.  “The federal government and the state government has no right to tell people that they can’t run a business and they can’t tell communities that they have to close their parks,” he said.

“The community needs to let everyone in the State of Maine know that we’re open for business and we’ve got to get back to work,” Sherrard added.  “We’ve got to open our parks, open our rec. department, open the city building.  We’ve got to let our businesses run and make money and support their families...we need to get everything going and just get back and use common sense and let the parents decide whether or not they want their kids participating [in recreational programs] and if they don’t, that’s fine, but the entire population cannot suffer like this because of something that is less lethal than the flu we get every year.”

Mayor Billy Howard agreed. “I think we need to get open, the sooner the better, and I totally am against everything [Governor Mills] has done,” he said.

Howard also stated, “Anyone who has got issues or has worries, shouldn’t go out,” to which Sherrard added, “They’ve got to accept an amount of personal responsibility.”

“As far as the private sectors are concerned, not the city property or the city building or the schools, I would like the city council to say [if any business wants to fully open] and their customers want to assume the responsibility of personal protection, us, as a council, should not have a problem with that,” Sherrard told his fellow councilors, adding, “And who the hell are we to tell somebody that they do not have a right to make a living?”

Sherrard addressed the council with the following:  “I make a motion that the city council does not have a problem with any private sector business who wants to open and operate in this community to earn a living and support their family.”  He confirmed that this does include also the re-opening of the city building and other city-owned properties.

All councilors were in favor, with the exception of Councilor Marcia Rogers, who expressed concerns on the health and safety of the citizens.

As for Calais Police Department taking action on any business who opens as they choose, against Gov. Mills’ Executive Order, Sherrard said, “Our police department is not going to inhibit someone from making a living.”

The Calais Advertiser spoke with Councilor Sherrard on Friday to obtain further clarification.  He explained, “The spirit of my motion was the City of Calais is not in business to tell people how to run their business.  We’re not in business to tell people how to provide for their families.  So every person has to accept a little bit of personal responsibility to take care of themselves, so it’s up to the individual to decide what they will or are not willing to tolerate, so we’re going to leave it up to the business owners’ discretion as far as I’m concerned, that was the spirit of the motion, leave it up to the discretion of the people that own the businesses and the discretion of the patrons to decide what their risk tolerance is and to decide whether or not they want to participate.  If they don’t want to frequent those businesses because of the way [the businesses] are operating, then that’s their prerogative, but we’re not going to tell people what they can and can’t do, because first of all, I don’t even think it’s constitutional or lawful to do that, and second of all, we have no right to tell people how they can and cannot provide for their families.  We can’t force people to financial ruin because of something that is beyond their control.”

Sherrard went on further to explain that if one has a complaint about how a Calais business is operating with regards to Gov. Mill’s Executive Order, that person with the concern will need to contact the State to see any possible action occur.  “The state is the one that imposed these restrictions on everybody; they need to be the ones to enforce it...If someone wants to file a complaint, they’ll have to do it at the state level,” he said.

City Manager Mike Ellis told The Calais Advertiser on Friday, “Beginning Monday, May 18, all businesses located in the City of Calais are considered essential and may open for business. The City trusts its business owners to use common sense and operate in a safe and responsible manner.  The City also trusts its citizens to respect the precautionary measures put in place by each business to help ensure the health and safety of the entire community.  Most importantly, the city respects the right of each citizen to make their own decisions regarding which businesses to patronize, as well as their right to not patronize businesses at all and stay home.”

Throughout the pandemic, Washington County has had two confirmed cases of coronavirus, and both have been reported as recovered.