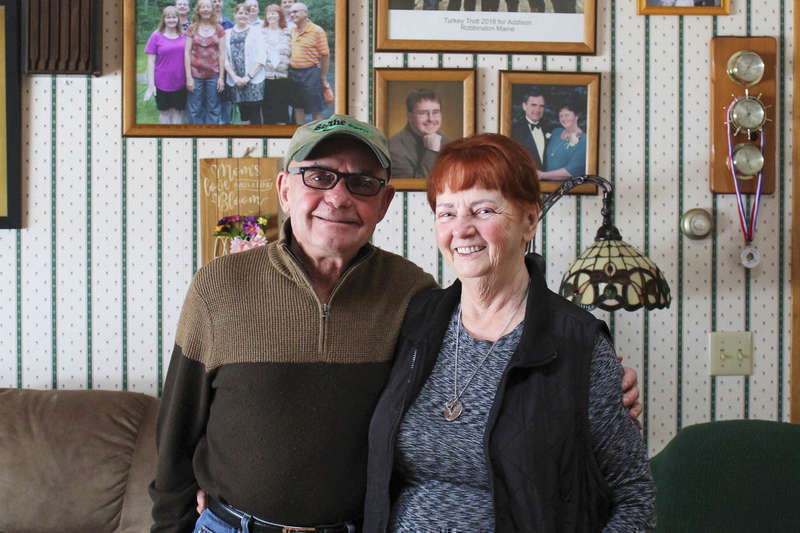 Rick and Barbara Roussel, married 57 years and enjoying the best time of their lives. (Photo by Jayna Smith)

It was the fall of 1959 when 15-year-old Rick first laid eyes on 13-year-old Barbara.  He saw her at a dance he attended with a couple of friends.  “I saw her dancing, and I said, ‘Geesh, I’ve gotta dance with that girl,’ and so I did, and I told my buddy, ‘I gotta see if I can go out with her,’ and I just fell in love with her right from the get-go,” Rick Roussel said of his now-wife, Barbara.

“He told his mother he was going to marry me,” Mrs. Roussel said with a smile.  Mrs. Roussel recalled though, at age 13, she was not thinking of dating, let alone marriage.  “I had no thought of ever seriously getting involved with anyone,” she said.

Although it didn’t happen immediately, the two did begin dating, and Mr. Roussel was right:  on October 13, 1962, he did marry Barbara.  He was not quite 19; she had just turned 16.

With a house full of little ones, times were not always simple for the married couple. In the first twenty years, Mrs. Roussel recalled her husband was working hard to make a living while she kept busy raising the children.

“We had a big family, and it was kind of rough,” Mr. Roussel said, explaining that finding suitable housing was challenging with that sized family.

As a young man, Mr. Roussel also hadn’t yet mastered effective communicating and selflessness, but it came.  “We just learned if there are problems, to try to communicate about it...it was hard when we first got married because everything was my way for a while.”

Today, however, the couple knows how to communicate with each other and have a great deal of trust for one another, two important pieces to their lasting marriage.  Mrs. Roussel explained, “Trust is a very important issue.  We have to be able to talk to each other.  This is learned over the years, it isn’t something we’ve always done. It’s just something we worked through.  Today, everything just seems to fall into place.”

Sometimes for Mr. Roussel, he admits, speaking from the heart doesn’t come naturally.  “We tell each other almost every day that we love each other.  What I can’t say sometimes or am hesitant to say for whatever reason...I pick out a card that really expresses my feelings, and she appreciates it, and I get cards from her and I appreciate it.”

The couple say they are in the best time of their lives.  “We’ve worked hard on everything in our life.  The most important thing in our life, and always has been, is our family,” Mr. Roussel said.  He went on to explain how proud he is of his children, mentioning their strong work ethic and family values.

“We’ve been blessed with a wonderful family.  All of our family turned out good, which is a blessing.  How much had to do with us, we don’t know, but we hope we had something to do with it,” he added.

To keep their relationship strong and growing, according to Mrs. Roussel, the pair enjoys each other’s company.  “We go to the movies, we play cards, we play cribbage three nights a week, we still do things together.”

Mr. Roussel added, “We just keep it simple.  We try to visit family members.  We’re blessed that all of our family lives in Maine.”  This includes their 15 grandchildren and 20 great-grandchildren.

The Alan Jackson song “Remember When” is one that Rick and Barbara Roussel can relate to, so much, in fact, the couple had it played at their 50th wedding anniversary when they renewed their wedding vows, with their children in attendance and taking part.

The song tells the story of a couple growing together, marrying and making a family, living and learning, and looking back on it all, together, happy for the life they’ve had.  “That’s been our classic song forever,” Mr. Roussel stated.  “It kind of tells about our marriage, it really does.”

Despite some challenges in the early years of their marriage, the Roussels look back with pride on their 57 years together.  The couple made it through tough times, struggled with some hectic times, but learned and adjusted, coming out on top.  Their love for one another is very evident, as is their love they have for their family.