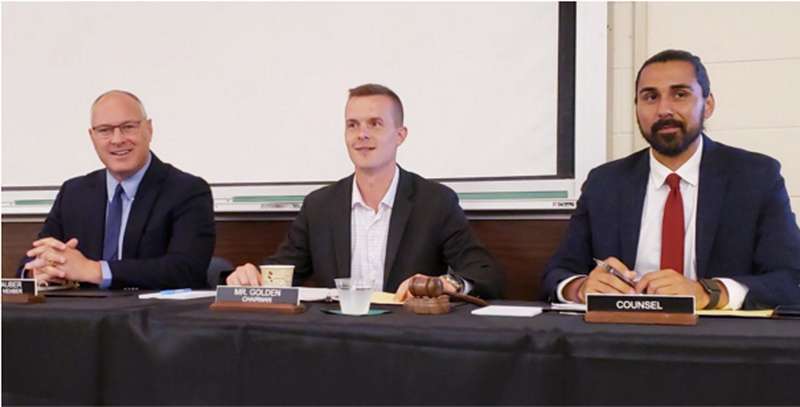 Congressman Peter Stauber (R-MN), Congressman Jared Golden (D-ME) and counsel ran the field congressional hearing held Friday, Sept. 6 at the University of Maine at Machias. “We hear from people in Washington County frequently...that they often feel like the state legislature and Congress don't really pay attention to the specific needs of Washington County, because it is more remote,” said Golden. “So I came here to make the point that we care, and that we're making it a priority to work with these communities.” (Photo by Sarah Craighead Dedmon)

As the first week of school came to a close, something unusual took place in Machias. Two U.S. congressmen sat behind microphones in a University of Maine at Machias classroom. A television camera focused on the congressmen, one of them swung a gavel, and so began a formal U.S. congressional field hearing.

Democratic Maine Congressman Jared Golden arrived in Machias with Republican Minnesota Congressman Pete Stauber to host the hearing. Both congressmen represent rural, northern districts and both are members of the House Committee on Small Business. As subcommittee chairman, Golden ran the hearing which he said was partly to gather information for legislation he and Stauber are preparing, preliminarily called the “Small Business Last Mile Act of 2019.”

Golden said that in his district alone, more than 80,000 people do not have access to high speed internet.

The term “last mile” refers to the final physical line that must be built in order to connect a building to broadband infrastructure. It’s an expensive connection to build, and especially unprofitable for companies serving rural areas, where the distances are great and the populations are small.

The Last Mile bill seeks to offer grants ranging between $15,000 and $35,000 to small businesses who need to pay for broadband internet installation.

Baileyville Town Manager Chris Louglin was one of four witnesses to give testimony, and spoke on behalf of the Downeast Broadband Utility, a nonprofit developed by Calais and Baileyville to bring broadband internet access to those towns. Loughlin stressed the importance of a nationwide network built on fiber technology.

“The internet backbone is fiber. What is referred to as the middle mile is fiber. Where the country has dropped the ball is in the last mile,” said Loughlin.

Golden said that Maine has the second slowest broadband in the country, and Federal Communications Commission maps depicting rural broadband coverage in the U.S. are “grossly overstating the number of households that have broadband,” owing in part to the fact that internet service providers self-report what services they’re offering.

“First and foremost, the federal government must have accurate data to ensure that funds and resources are efficiently allocated to expand coverage to unserved areas,” said Golden.

Roque Bluffs First Selectman Lisa Hanscom was also on the witness panel. Roque Bluffs recently voted 63-27 to create access in their town by way of a municipally-owned broadband network. The town is still waiting to hear whether it has won a USDA ReConnect grant, which would largely pay for the million dollar installation, or if they will fund it via tax dollars.

Hanscom told the panel that the federal grant process was onerous, and she isn’t surprised that few communities manage to achieve a finished application.

“There are, at the very least, many hundreds of rural communities lacking meaningful broadband availability in the U.S.,” said Hanscom. “Only 38 organizations managed to submit applications to the ReConnect program this year. The unnecessary complexity of that application process is clearly a major impediment.”

Of the roughly 265 households in Roque Bluffs, Hanscom said only 42 have what is considered high speed internet, which the FCC says cannot measure less than 25 megabits per second, or MBps. That’s less than 20 percent.

“If you’re applying for a grant to put in broadband, anything you build has to be providing at least 25. But if an area already receives 10 MBps, then it doesn’t qualify for the grant,” said Hanscom.

Not long after the town submitted its application, Hanscom said the town received offers from companies willing to deliver 10 MBps service, but none would guarantee the entire town would be served.

“If we’re going to invest this kind of money, we want it to reach every single home in the town,” she said.

During the hearing Hanscom testified that her home currently receives download speeds of seven megabits, and upload speeds of only one megabit, roughly equivalent to the FCC’s 2010 standard for high speed internet.

Those outdated speeds plus the absence of broadband in most of the town, testified Hanscom, are impacting students’ ability to complete their homework, seniors’ ability to access telemedicine, and her ability to run a business in Roque Bluffs.

Golden asked Axiom Technologies President and CEO Mark Ouellette if he felt the bill’s grant range of $15,000 to $35,000 was sufficient to help businesses get broadband. The bill also stipulates a 20 percent match from the business.

Ouellette said he agrees with the 20 percent match, giving businesses some “skin in the game,” and that the grant amount is probably sufficient for many, but not all.

“The further away you get...from a main fiber line, the more expensive it’s going to get. So you’re still going to miss a bunch of places, especially in rural Maine, where it’s difficult to find the fiber connection to connect to affordably,” said Ouellette. “When I say affordably, I mean for $120,000.”

During his testimony, Ouellette said there is no doubt in his mind that our lack of rural broadband is creating an economic lag on our economy, then made five summarizing points: that everyone should have equal access to broadband, that the government should stop investing in outdated technology and choose technologies that are “future proof” like fiber, that reliability is paramount, that Congress should ensure connectivity is not dictated by the location of your home or business, and that digital literacy across our population is key.

Hanscom said that President Theodore Roosevelt set a goal of creating nationwide access to electricity in the 1930s, but that it was the 1960s before every home had access in Roque Bluffs.

“Most small rural communities lack a broadband network all together. The problem is not just a single mile down the driveway to the road, it’s extending the network over many miles to provide service on the road itself,” said Hanscom. “I hope they will not have to wait 30 years to lift all of our boats, all of our communities by bringing this real opportunity to all of those who dream to better themselves and their family.”

The vision of running of dark fiber or fiber optic cables began in late 2015 with a conversation between Calais Mayor Billy Howard and Pierre Little, the publisher of this newspaper. Howard, a counselor at the time, asked what would be the one thing that would benefit Calais and the surrounding area the most for economic development projects and Little replied, installing dark fiber and fiber optics for high-speed broadband internet and owning the pipes. With that idea, Downeast Economic Development studied it and agreed and began this important investment to promote jobs and economic opportunities for Calais and Downeast Maine’s future. Recognizing the lack of sufficient broadband in the area was the primary reason and the vision of creating a municipal broadband network began.  Related Article