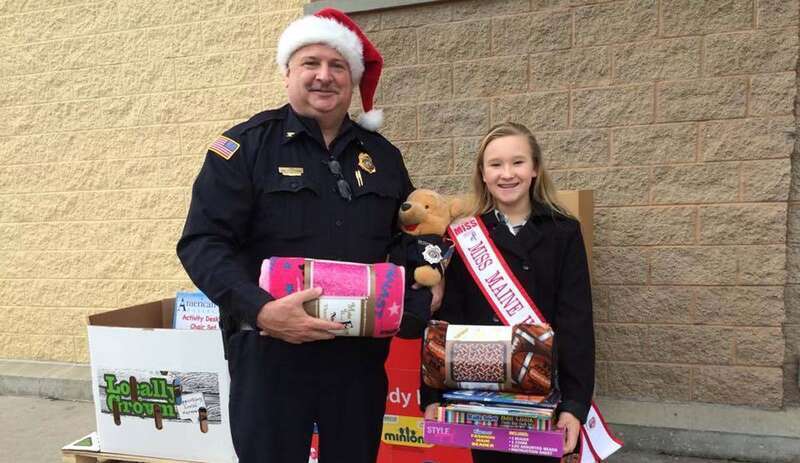 This year’s Stuff the Bus event was held in memory of Dawn Smith. Dawn instilled in all of the girls she worked with a love for community and giving to others. One person who exemplifies this is Cassidy Carr, shown here in 2015, the program’s first year. Cassidy, now a senior at Calais High School, has come back every year since, making donations to help kids have a merrier Christmas. (Photo by the late Dawn Smith)

The 7th annual Stuff the Bus event was held on Saturday, and as expected, the generosity from local people was as great as ever.
Stuff the Bus, a Christmas gift collection program spearheaded by Baileyville Police Chief Bob Fitzsimmons, collects items for children of all ages throughout the county at a day-long campaign at Calais Walmart.

The campaign began in 2015 as the “Fill the Cruiser” event.  Fitzsimmons realized soon into the first year’s event, however, that the cruiser was not large enough for all that was donated.  It was quick to get filled, along with two trucks and two trailers, with gifts for the less fortunate,

The very next year, beginning in 2016, the name was changed to “Stuff the Bus,” and included a big school bus, and has each year since, courtesy of the Baileyville School Department.

Filling the busses every year since has never been a problem, thanks to the generosity of so many willing to help those in need.  Likewise, finding volunteers to assist the day of the event has always been an easy task for Fitzsimmons, despite varying temperatures and amounts of precipitation each year.

Those volunteers always include Fitzsimmons’ wife Linda and law enforcement officers and their families, among many others, including students, scouts, pageant girls, and more.

During the day’s event, many shoppers come out of Walmart with an item or items for the bus, while some give cash instead, that will all be used to purchase needed items.

As well, many stop by with car loads of items purchased throughout the year, specifically for the Stuff the Bus event.  Many groups fundraise, including veterans groups, the Spednic Club, which holds an annual bowling tournament to benefit Stuff the Bus, and other groups.
Stuff the Bus provides much more than just toys.  Also among the gifts for kids are warm clothes and personal hygiene items like deodorant, toothbrushes, soaps, and shampoos.

One thing that sets this program apart from other Christmas-assistance programs is that those in need are not required to complete applications or provide personal information, such as income, family size, or addresses.

For one to receive assistance through Chief Fitzsimmons’ Stuff the Bus program, all they have to do is show up during the designated pick up times of 9 a.m. to 3 p.m. Monday through Friday this week at the Baileyville Town Office or contact Chief Bob Fitzsimmons.

This year’s Stuff the Bus event was held in memory of Dawn Smith, a local woman who instilled in others the love of volunteering and giving back to the community.

The Educrats Are All in on Critical Race Theory